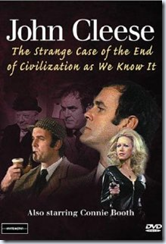 (1977)
Directed by Joseph McGrath
Written by  John Cleese, Jack Hobbs, Joseph McGrath; Original idea by Hobbs and McGrath
Starring John Cleese, Arthur Lowe, Ron Moody, Connie Booth, Denholm Elliott, Stratford Johns
IMDB Entry
Benedict Cumberbatch’s Sherlock is sensational with its reimagining of Holmes in the modern day.  This isn’t the first, of course – Basil Rathbone had modern day adventures in the 40s, but had little critical favor.  And, in 1977, an obscure BBC film also showed a present-day Holmes – to comic effect.
The Strange Case of the End of Civilization as We Know It, was a short TV film with John Cleese as Holmes’s grandson, brought in for a case where the great detectives of the world are being killed off, as a plot by Moriarty to end Civilization as We Know It.

The film had a lot of things going for it.  There’s Cleese as Holmes, of course, as well as Arthur Lowe’s Watson.  Watson is often portrayed as being a little bit slow on the uptake (though not recently), and Lowe is by far the slowest.  Every one of Holmes’s comments – no matter how mundane -- were greeted by comments about  how clever Holmes was.

Despite some great moments, though, the film is uneven and wears badly.  There was a ton of topical humor, and many of the references are pretty obscure today.  Even worse, the direction is deadly slow.  The jokes are funny (if a bit broad), but there’s too much waiting between things.
Still, there’s plenty of funny moments.  My favorite is when Watson reads off crossword puzzle clues to Holmes (read them aloud if you don’t get the joke):

The show appeared once or twice in the US and UK, and then was quickly forgotten.  It’s certainly not genius on the level of Monty Python or Fawlty Towers, but it’s a very funny sidelight to the careers of the Pythons.
Posted by Chuck Rothman at 10:26 AM