The Thief of Bagdad 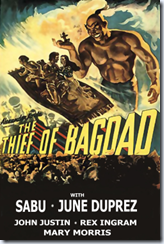 Hollywood was the place of dreams and fantasy, yet, up until relatively recently, fantasy films were rare, and usually with a mundane setting.  The idea of a completely realized fantasy world is a very recent one, probably due to the Just Imagine! effect.*  So it took UK producer Alexander Korda to make the greatest high fantasy until Lord of the Rings with The Thief of Baghdad.

It was a remake of a silent film by that name, but done in Technicolor and advanced effects for the time.  And it’s an Arabian Nights fantasy, using that setting to frame a magical tale.

The evil Grand Vizier Jaffar (Conrad Veidt) conspires to throw the king Ahmad (John Justin) into a dungeon and usurp his throne.  With the aid of the young thief Abu (Sabu), he escapes and leaves the city, only to fall in love with a princess (June Duprez).  But the Vizier also has designs on the princess and uses his magic ability to get his way.  All seems lost, until Abu discovers a magic lamp with a giant genie (Rex Ingram) who agrees to grant him three wishes. 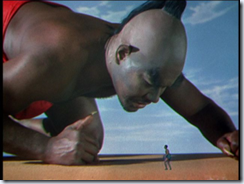 The movie is filled with imaginative fantasy ideas, and the film was a major technical advance, the first to be done in a modern bluescreen process.  The characters were also memorable.  Sabu, who had come to notice in the film Elephant Boy three years before, is clever and a cheerleader for the King’s efforts to win the princess; it’s a charming role.  Conrad Veidt was a larger than life villain, even worse than the one in his most famous role of Major Strasser from Casablanca.

The production was troubled.  Producer Korda kept firing directors, and, since it was filmed during the Blitz, the Luftwaffe was dropping bombs around it.  It was finally moved to Hollywood to be completed, and many of Sabu’s scenes had to be reshot due to the delay (he was only 16 when the film was being made).

But the film was worth the effort, being both a critical and financial success.  It became the blueprint for Arabian Nights films for years to come.**

Alas, Sabu*** wasn’t quite as successful, suffering the fate of many non-western actors who went to Hollywood in the 40s.  He could only be cast in ethnic parts.  The Jungle Book was the obvious next step for him, and succeeded, but there are only a limited amount of roles for a teenager from India back then.  He became a US citizen and served as a turret gunner in World War II, earning a Distinguished Flying Cross.  But once he returned, good parts were hard to come by, and he died of a heart attack at age 39.

**Note that the Vizier has the same name in Disney’s Aladdin, and the monkey in that film is Abu, both nods to the 40s version.

Posted by Chuck Rothman at 6:31 PM

Looks like the genie from Shazzam, the Saturday morning cartoon.

My favorite sequence was the giant spider hanging above the octopus pool.