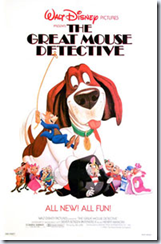 Strange as it may seen now, by the mid-80s, Disney animation was in trouble.  The market for animated films seemed to have dried up, and Disney hadn’t had a big hit in years.  The pace was slowing:  only four animated films in the 70, and the two in the 80s were the bland The Fox and the Hound and the flop The Black Cauldron.  Disney seemed content to make their money by rereleasing their classics to new audiences.

This was unacceptable to new studio heads Jeffrey Katzanbach and Michael Eisner, who gave the green light to The Great Mouse Detective, probably the second most important animated film in Disney history after Snow White.

The story was based upon a Sherlock Holmes pastiche, Basil of Baker Street, by children’s author Eve Titus.  In the movie, Hiram Flaversham (Alan Young) is (like most of the characters) an anthropomorphic mouse, and a famous inventor among mousedom.  He’s captured by the bad Fidget (Candy Candido) and taken to the mad genius Professor Ratigan (Vincent Price), who wants to use his discoveries to take over the world. Hiram’s daughter Olivia (Susanne Pollatschek), seeks out Basil of Baker Street (Barrie Ingram) to find her father.  With the aid of Dr. David Q. Dawson (Val Bettin), they try to thwart Ratigan’s fiendish plan.

Ratigan is one of the great Disney villains, and perhaps the first to have an established name playing the character.  And who could be better for it than Vincent Price.  He has a perfectly entertaining bit of hammy menace, gloriously evil and insisting above all that he’s a very large mouse, not a rat.

In many respects, this is minor Disney, but it was something very important for the studio:  a hit.  And it encouraged Disney to think that maybe animated films could still be their bread and butter.  The faith was paid off three years later when The Little Mermaid (also directed by Clements and Musker) became a smash hit.

Posted by Chuck Rothman at 7:02 PM

Great review. I'm happy to say that I saw this one in the theater when it first came out.

This was one of my Favs I loved the Rattagan song most.

Fidget is obviously bad, but I wonder if the word right before his name was meant to be "bat"?