Political humor dates badly.  I remember taking an Art Buchwald column during the Watergate days and saving it, because it was the funniest thing he had written.  Six months later, it was mildly amusing.  A year later, it was just barely funny.  Now, I doubt anyone would laugh it all.*

It’s the same thing for political drama.  Political books written in the Cold War era just don’t have the same impact today, and have long since been forgotten.  But one of the biggest names in the genre was Fletcher Knebel. 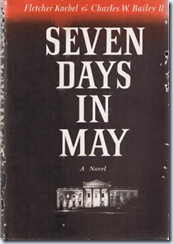 Knebel was a reporter and political columnist in the late 50s and early 60s. He started writing novels, joining up with another newspaperman Charles W. Bailey.  Their first novel – and the only one by Knebel that is still familiar today was Seven Days in May.  It was the story of an attempted military coup against the US president, inspired in part by Knebel’s meeting General Curtis LeMay.**  The book was a massive popular and critical success, and spawned a well-regarded movie.***

For most people these days, that’s probably all that Knebel is known for.  But he continued to write successful political thrillers into the 1980s.

He followed his success with Convention, then parted company with Bailey to write on his own.  All his books were of the same type:  political events lead to serious questions like what to do if the president may be insane (Night of Camp David)**** or an important top aide disappears (Vanished) or if the presidential candidate dies just before the election (Dark Horse).  The books were great page turners.

But I doubt they’d have much appeal today.  The assumptions and fears were in a far different political climate.  Trespass, for instance, is about Black militants taking revolutionary action, something that was a potential (if unlikely) threat back then, but which sounds just silly today.

Still, Knebel was a major success, his books selling over 6 million copies worldwide.  All are out of print (including Seven Days in May, though you can buy the movie), and aren’t likely to be rediscovered.

Knebel died in 1993, committing suicide after a long bout with lung cancer.  Ironically, his most famous quote is “Smoking is one of the leading causes of statistics.”

He may never come back into style, but his writing is worth remembering.

**LeMay was a successful commander who became too right wing for the military, famous for his comment about bombing North Vietnam back into the Stone Age.  He advocated using nuclear weapons in Vietnam and ended up running as George Wallace’s vice president for the American Independent Party in 1968.

***The book was actually near-future science fiction.  The movie tried to show this by using people talking on videophones.

****Written prior to the 25th Amendment spelled out the process.

Posted by Chuck Rothman at 6:36 PM

He was a great friend to those he had in his life.

his ability to conjure up bizarre scenarios was amazing. his conception letters, one of which i received, were so fun and imaginative. i wish i could still visit with him such talent! RIP fletcher