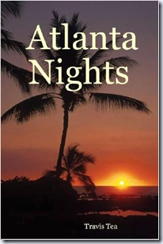 By Travis Tea
Wikipedia Page
Free Download (pdf)
Lulu Press Version
Travis Tea Website
Atlanta Nights may be the worst novel ever written.  That was deliberate. It was a sting to prove that PublishAmerica -- who claimed to be a legitimate book publisher -- was actually a vanity press that would accept anything.
Over thirty science fiction authors* wrote chapters in one crazy weekend, with only the skimpiest of outlines, with the goal to write as badly as possible.  No one knew what anyone else had written.  Characters changed hair color, description, and even race and even sex from chapter to chapter.  Cliffhangers in one chapter were never resolved.  A character wakes up in the middle of the book and realizes everything was a dream.  Another character is dead, then alive again. The sun sets in the East.  There are penguins in the Sahara.  There were two chapter 12s.  Chapters 4 and 17 were identical.  There was no chapter 21.  Chapter 34 was randomly generated by a computer.
Editor Teresa Neilsen Hayden put it best:


"The world is full of bad books written by amateurs. But why settle for the merely regrettable? Atlanta Nights is a bad book written by experts."

Then the whole mess was sent off the PublishAmerica, who wrote about their high standards and how science fiction writers couldn't write well enough to be accepted by them.
They accepted it.
Of course, word got out immediately.  PublishAmerica then suddenly withdrew their acceptance, saying they discovered one chapter (Chapter 34) was gibberish.  Which means they didn't even read it through**.
The story became an Internet sensation when it was announced in early 2005.  It led to all sorts of jokes and strangeness.
And now, the crowning achievement:  The book has been optioned for a film.  Rachel Saltzman, an independent filmmaker, is working on a combination of documentary/dramatization of the 21st century's worst published novel.
Of course, film options are gambles; there a good chance that there will be no film.  Saltzman is using a page on Kickstarter.com to raise a budget.  If you want to be part of film history, think about making a pledge.
It will be worth it for the Penguins.
___________________________________________
* I was one of them.
** To be fair, very few people have managed to read it all.
***Say it out loud.  Some of the writers involved included Alan Steele (who had to get completely drunk to be able to write his chapter), Robin Hobb/Megan Lindholm, James D. Macdonald, Adam-Troy Castro, Kevin O'Donnell, and many others (see Wikipedia article).
Posted by Chuck Rothman at 7:04 PM

Thanks for the shoutout! Film options are indeed a strange proposition, as so many things can go awry. I'm doing my darndest to make this one happen. As silly as part of the premise is, the education and warnings content may be some of the most important work that I've done in a long time.

omg, my word ver is prefake!