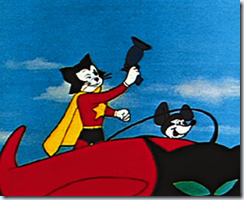 Courageous Cat was a costumed crime fighter, who, based in his Catcave, fought strange super villains while driving in his Catcar, or flying in his Catplane, assisted by Minute Mouse.

The similarities to Batman a pretty obvious, but no one at DC complained, because the cartoon was created by one of Batman's creators, Bob Kane.*

Courageous Cat and Minute Mouse was a series of syndicated five-minute cartoons that were sold to individual TV stations across the county, who would then run them during their local kid's shows. Since they were short, they could fit in anywhere.

The stories were pretty much the same. A villain -- the Frog (an Edward G. Robinson pastiche), Professor Shaggy Dog, The Black Cat, and many others -- would start committing crimes, and the Chief (a dog) would call on Courageous Cat for help. Courageous Cat would drive around in his Catcar, and shoot his Catgun (which could do anything except shoot bullets) until the bad guy was stopped. Minute Mouse was there to add comments and drive the car while Courageous Cat stood up to fire the gun.

In the short time frame, there wasn't a lot of time for characterization or anything other than the simplest of plots. Usually, the villain starts his nefarious scheme and Courageous Cat shows up. The villain then sets traps for him, which the Catgun always allows Courageous to thwart. Then the villain is captured.

But one element of the show was truly great -- its theme song. Written by Johnny Holiday, it's reminiscent (i.e., a rip off) of Henry Mancini's Peter Gunn Theme, but is the jazziest cartoon theme song ever. Here it is (and take a look at the Catcave, while you're at it).

They cartoons were repackaged into full-length shows, but vanished from the airwaves by the mid-60s. And political correctness kept them from coming back. The Catgun was no longer considered appropriate for a kid's show, even if it never shot bullets. Plus the Frog -- the most important recurring villain -- always smoked a cigar. That made it even worse.

The cartoon shows up occasionally and a DVD set is out. It's pretty simple by today's standards, but its had gained a bit in silliness over the years, so it's still fun to watch.

* Kane gets all the credit, but Bill Finger was just as important. Finger changed the look of Kane's original concept to the Batman, adding the cape, cowl, and gloves and removing the red color from Kane's original concept. Finger also wrote the first few Batman stories, while Kane supplied the art (and quickly hired Jerry Robinson to do that for him).

Written by Johnny Holiday, it's reminiscent (i.e., a rip off) of Henry Mancini's Peter Gunn Theme, but is the jazziest cartoon theme song ever.

As much as I love it, I think the "Johnny Quest" theme song had more swing.

I remember watching Courageous Cat and Minute Mouse when I was a kid in the 80's. I loved it.

The cartoon almost always appeared on Channel 3 in Philadelphia immediately after the morning station sign-on, usually 5 am to 7am. It appeared from original release through 1989, possibly beyond. The death knell of routine airing was the advent of infomercials and 24 hour broadcasting days. The same programming template is now occurring on cable television with most original content providers abandoning their founding programming for reruns of cheap, low brow reality television. Disney/Hearst/A&E is one example with the advent of Viceland which has been relocated to the "get rid of bin" end of Comcast's channel assignment spectrum. Essentially, animated cartoons have been replaced with non-animated reality television filled with "cartoonish" people who live mostly cartoon/cartoonish lives. The more things change....

Yes! I very fondly remember COURAGEOUS CAT & MINUTE MOUSE playing on Channel 3 in Philadelphia on Saturday mornings in the 80's. In fact, in 1989, it was on at 6:30 before the network cartoons began at 8:00 A.M. I feel like they reran the series until the 1990 season started, if my memory serves me right. Channel 3 would usually play the made-for-TV POPEYE cartoons right after COURAGEOUS CAT & MINUTE MOUSE.