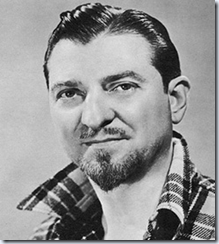 He was billed at "Television's Original Art Teacher," and few disputed the claim.  Jon Gnagy was a fixture on TV in the 50s and 60s, and millions bought his "Learn to Draw" kits in an attempt to bring out their artistic ability.

Gnagy grew up in Kansas, where he took up drawing and began winning art competitions when he was in his teens.  After attending art school, he moved to New York in the Depression to try his hand as a freelance artist. He gained success surprisingly quickly, getting a major commercial art contract two days after he got there.  He went on as a successful freelancer and teacher, developing his system to make people comfortable drawing.

All that put him in a good position when, on May 16, 1946, the first television broadcast from the Empire State Building antenna was aired. Gnagy's charm and ability let him to getting the leadoff spot on the broadcast, and he was on TV for years afterwards.

Gnagy's system made it easy for beginning to learn to draw.  He broke everything down into four geometric shapes:  a ball, a cone, a cube, and a cylinder, and promised that if you could draw those shapes, you could draw anything.  And he would proceed to show you how.

Gnagy was a fixture of off-hours TV.  Part was because his shows were interesting, but I suspect that they were also cheap for the stations to run them. Production costs were minimal -- there was just Gnagy and one camera.  In addition, Gnagy also sold a "Learn to Draw" Kit, which had 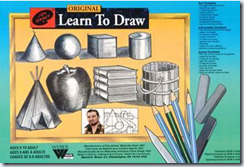 all the pencils, erasers and other equipment needed to follow along with the show. The kit and others by him are still being made, and kids continue to use his methods to learn how to draw. But sales of the kit clearly helped support the show, and probably allowed Gnagy to make offer it at a low price.

It's hard to get a handle on the show's history.  It was syndicated, and appeared in odd timeslots like Sunday mornings.  By the late 60s, they were gone.

Gnagy had the ability to make things look easy enough that any beginning artist could feel he could follow along.  Thousands of kids -- including many who went on to be professional artists -- got their start from his shows.

Posted by Chuck Rothman at 5:40 PM

Heh heh heh. Jon is great but NOT
forgotten! People need to visit his website! I enjoyed very much learning to draw with his wonderful kit that my mother had over 45 years ago. These techniques are simple and
very effective.
Sincerely
Anne Saunders
Dawson City,
Yukon.

My wife Polly is Jon Gnagy's daughter, and we have maintained the webpage on his life and work since 1996. We very much appreciated your tribute to him on your webpage/blog, and I hope you don't mind if I posted a link to it.

I have been updating the Jon Gnagy page. The original site was done in early HTML, and it is pretty basic. I guess it was when someone wrote, "stupidest and ugliest webpage ever," that I decided it was time to start over!

Using iWeb and some things I've learned over the years, we now have a new site but with the same address. It is also posted at www.jongnagyart.com.

One of the pages lists a number of blogs, including yours.

I assume that it's okay to post your link. Thanks for your good words about Jon.

What great memories I have of Jon Gnagy and learning to draw...I got one of his kits when I was 6 or 7 and I would draw with him on his morning show...even when I stayed overnight at my Nana's house for a weekend, I would have my drawing kit and watched...Saturday and/or Sunday mornings, I believe.
I will, in fact, forever associate Jon and happy times at Nana's house...Thanks for starting me on my artistic hobby!!!!
Anthony Muller
The Villages, FL

My brother's work was featured on the TV show when there was a "Design a Kalupy (sp?) Bird contest. Everyone, including me, had at least one Jon Gnagy drawing kit. Great memories!

I'm a Jon Gnagy "Learn To Draw" recipient from the 60's. I still have my chalks, the rolled paper blender, the sandpaper wooden paddle and the book in great condition. I loved the show, the man and the talent, even at a young age. I am still very interested in art and have many great memories.

I have a signed drawing of Jon Gnagy called Manzenita how do I find out if it is worth anything.

I dated his son who was a very nice man.

Discussing the Jon Gnagy Learn t Draw set with my art instructor who is 10 years my junio. She had never heard of him!! One of the best Christmas presents EVER!!!

Man About the World said...

I started off watching his show as a young boy, about 8 years of age. I soon bugged my mother to purchase the kit. Never became an artist, but I will always remember the simplicity of Jon's approach to art. RIP Jon, I loved your show!

Jon Gnagy, I got your kit, so it must have been cheap. Thank you for that...And for the beard thing too. It was so cool. I couldn't wait to grow up and get one. You are a great childhood memory. You aren't really gone.

I was in an art supply store yesterday and was amazed to see LEARN TO DRAW on a shelf, in a box with the same illustration and almost the same contents that I remember from 60 years ago. The only thing I don’t remember is the little sandpaper pad, and I suspect that faulty memory is a more likely explanation than any change in the kit. The book is exactly as I remember it. The only change I can attest to is today’s price: $19.95 — allowing for inflation, I’m pretty sure that is considerably LESS than the price was in the late 1950’s.

I bought it without hesitation, and I am so excited to be working through the book again. Thank you, Jon Gnagy, thank you so much!

They did have a little stick with sandpaper on in it in the old box. It was for sharpening your pencil etc. I just purchased a old copy of the book on eBay. I am amazed at how well I remember the example drawings. That covered bridge barely dimmed at all in my memory, unlike so much else that has. Have fun with your new kit.

What memories. We watched this show every week. I was thr worse drawer in my class ( but good at math, etc). This show made me love drawing. There was something magical about the simplicity of his presentation. I remember running to my mother afterwords snd she would tack my drawing to our kitchen wall. i never became even a 'b' grade artist but hsve passed maby hours doodling his lessons. My fsvourite was drawingas harvest pumpkin.

Jon was a major influence on me in the '60s. He taught me the vanishing point and other sophistications as a youngster.
I hung on his every word and every flourish.
God bless him and his memory. I talk about him all the time.
J. Murray Tarter
Blairsville, GA

I never had the kit, and I never even tried to draw along with him, but I was an avid watcher of his show. I canNOT draw, colour within lines, shade evenly, have neat penmanship, etc. Poor fine-motor control lifelong.

Thanks for this blog posting.

Wonderful memories of his drawing book, which I still have, 60 years later, in my bookshelf. End of a wonderful era.