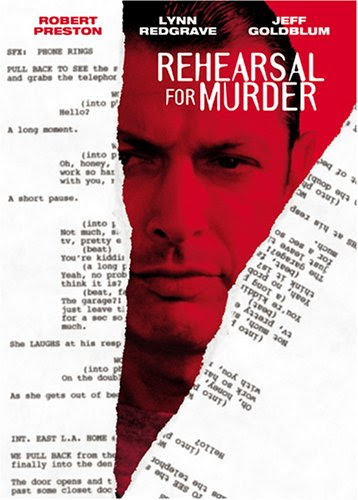 I've written elsewhere that most of the made-for-TV movies of the 60s and 70s were dismal.  That also true for those of the 80s, but every once in a while, there was a gem.  And that applies Rehearsal for Murder.

I'm a sucker for and old-fashioned whodunit and this is one of the best this side of Agatha Christie.*  The set up is simple:  at the opening night of a Broadway play, leading lady Monica Wells (Lynn Redgrave) commits suicide after getting bad reviews about her role.  A year later, her fiancee, playwright Alex Dennison (Robert Preston) gathers the principals in an empty theater to read a new play he's written.  You see, Dennison never believed Monica killed herself, and the play is a trap to show not only that she was murdered, but who did it.  He brings in the detective who originally investigated the case, Lt. McElroy (William Russ) to watch the proceedings in an attempt to convince him of the truth.

The various actors have no idea what they're getting into, but follow Dennison's script (under protest from some) until the real killer is revealed.

The movie was written by the writing team of Richard Levinson and William Link, probably the best TV mystery writers of their era**, with shows like Burke's Law, Colombo, McCloud, Murder She Wrote, and Mannix to their credit.  They were probably the best practitioner of mystery scripts in the history of TV.

It's hard to single out who's best in their roles, but my nod is to William Daniels for one particular scene.  His character is the one person who has no acting experience and when he reads it role, he fills that part perfectly, stumbling over lines and saying them with the tentativeness of a true amateur.  It's seems incredibly hard for a pro actor to "unlearn" all his skills to sound the way he has been working for years to avoid.***

But it's a pleasure to see Robert Preston, Patrick McNee, Lynn Redgrave (in flashback), and Jeff Goldblum also taking part in a clever and twisty script.

Only Agatha Christie could do this better.

**Not that TV had many good mystery series.  People didn't seem to like the traditional whodunit, and generally didn't care for mysteries at all until CSI brought the police procedural after all.  There were cop shows, and detective shows, but they never concentrated on the puzzle that makes mysteries so much fun.

***Alan Steele, one of the "Travis Tea" authors of the Atlanta Nights hoax, faced a similar problem when trying to write like a terrible writer for the book and could only do it by getting roaring drunk.

Robert Preston *and* Patrick McNee in the same production? Where so I sign up?