The New Spirit of Capitol (music) 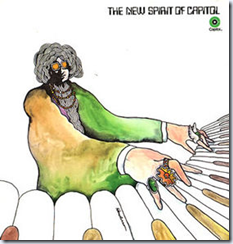 I've written before about sampler albums: compilations of music from a particular record label whose goal was to introduce people to new music.  Warner/Reprise had several of these, available by mail if you bought an album, but they weren't the only ones.  Capitol Records tried the same thing in 1969 with The New Spirit of Capitol.

So, in order to trumpet the changes, they released the album, The New Spirit of Capitol.  It consisted of an eclectic mix of British groups, especially from their Harvest label and US names and a surprising number of groups that went on to be superstars.  The tracks were:

**"Different Drum," which had been written by Mike Nesmeth of the Monkees.

***Linda Ronstadt put less emotion into her singing than any singer I've ever heard.  Her voice, though, was a magnificent instrument and a pleasure to listen to.

Posted by Chuck Rothman at 1:53 PM

Thanks for casting your spotlight light on this obscure little gem. I share the feeling that this is one of the best collections of music I never paid for. I got it free when I purchased the Siegel-Schwall Band LP back in 1969. Interestingly Hedge & Donna have a small, nostalgic following in Southern California to this day.

I bought this album back in the day. Have told the story many times of how many future stars were on it. Over the years I have gotten fuzzy on just how many there were. Thanks for refreshing my memory and paying tribute to a fine sampler album

just got this for 2 .00 bucks it sounds great thanks for infor.

I absolutely loved the wonderful duo, Hedge and Donna, back in the day and wonder what happened to them.

I have one still wrapped in the original plastic