A Letter to Three Wives 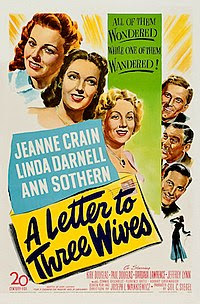 Joseph L. Mankiewitz is probably thought of by the casual moviegoer as a one-movie director:  his All About Eve is a film classic.  But Mankiewitz is much more than that.  He was an early writer-director, and a major name in films in the 1950s until his career took a hit with the megaflop Cleopatra.*

One of his earlier successes was A Letter to Three Wives.**

The premise is that, just as they go off on cruise with their children, three wives -- Deborah Bishop (Jeanne Crain), Rita Phipps (Ann Sothern), and Lora Mae Hollingsway (Linda Darnell) -- receive a letter from a mutual friend Addie Ross (voice of Celeste Holm).  Addie brags that, while they're on the trip, she will be running off with one of their husbands.  But who?

Deborah is a country girl, who feels that her background puts her out of place with her husband Brad's (Jeffrey Lynn) friends.  She wonders if he'd be more interested in the glamorous Addy.

Rita is a career woman, a successful radio writer, whose husband George (Kirk Douglas) resents that he makes less money than she does.***

Lora Mae is married to Porter (Paul Douglas), a wealthy owner of some department stores. He didn't want the marriage and sees it more of a financial transaction -- he supplies her with money and she keeps house.  He keeps hinting it will break up, partly because they weren't in love, and also because of their age difference.  I especially liked the way this was portrayed.

The film shows the three marriages, especially the flaws in them:  the type of things that makes all the woman think there is are reasons for their husbands to leave them for Addy.  The end slowly reveals the answer, with some twists you don't see coming.****

The cast does a good job of carrying it off.  Jeanne Crain and Linda Darnell are not well known by film buffs, but they were important actresses in their time.  Anne Sothern is best know today for as the title character in My Mother the Car, but was a top supporting actress for many years.  Paul Douglas was an esteemed stage actor who had just gone into films (this was his first real film role), while Kirk has done pretty well for himself.

It's all tied together by Celeste Holm's voice. Holm wasn't even credited; the idea was that Addy was so glamorous that it was better to not show her and let the audience imagine what she looked like.  But she gave the character life, and made it understandable that she was definitely a serious threat to all the marriages.

The film was a big success, winning Mankiewitz two Oscars for writing and directing, but missing out on Best Picture (he won the same two awards for All About Eve).  But the film has been forgotten.  One is that none of the stars (other than Kirk Douglas)  had staying power; even though they had successful careers, they weren't the marquee names that later generations of casual film buffs would bother to seek out.

Some of the concerns in the film are a bit dated, but that's more than made up for by the performances and Mankiewitz's sparkling script. The result is a dazzling entertainment.

*His brother, Herman J. Mankiewitz also has a film classic script to his name -- Citizen Kane.  It's hard to determine how much the script was Mankiewitz's and how much was Welles's, but he did contribute to its weak box office (contrary to legend, it did make money, but not a lot) by telling William Randolph Hearst about it beforehand, allowing Hearst to start to attack it even before it was finished.

**As I write this, I've just seen an episode of The Simpsons that parodies it. I doubt many of the audience knew what was being parodied.

****Other than the fact that the Hayes office was not going to allow the breakup of a marriage.

Posted by Chuck Rothman at 6:51 PM

The only movie wherein Kirk Douglas is absolutely adorable. The dinner with the radio executives is priceless.

In some ways "A Letter to Three Wives" is even more satisfying than "All About Eve". The previous statement is not one I thought I would ever say when I was in my 20s, but life is full of surprises. Ho hum.

Good to remind that.I think There are certain standards that have to be maintained to classify a film as a historical period film.