Edward G. Robinson used to joke that his middle initial stood for "gangster," but his career had him play a wide variety of roles, including this foray into comedy.

Robinson plays Arthur Ferguson Jones, a terminally mild-mannered clerk. He's secretly in love with Wilhemena "Bill" Clark (Jean Arthur), but is too shy to talk to her. The comedy begins when someone points out that Jonesy is dead ringer for the gangster "Killer" Manion (Robinson again). Jonesy is arrested and has to prove his identity, and the cops eventually get tired of arresting him and give him a "passport" that he can show to the police and not be arrested again.

And, of course, Manion shows up.

This sort of mistaken identity theme can get very tiresome, but in this case it works because it is never dragged out. The mistakes are ironed out -- but a new situation comes up that creates new variations on the problems. 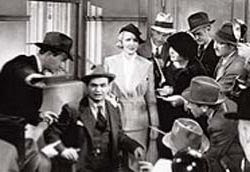 As expected, Robinson is excellent. You can tell when he is Jonesy and when he's Manion by the way he moves and carries his body, and the expression he takes. At a certain point, Jonesy has to pretend he is Manion and you can see him changing things to make a facsimile of his full-Manion act.

Jean Arthur deserves a great but forgotten spot all to herself. She was a wonderful comedienne, best known now, if at all for her work in Mr. Deeds Goes to Town and Mr. Smith Goes to Washington. She was one of the biggest stars of the 30s, though by 1950, work for her was rare. Watching her in her comedies, she's an intriguing presence.

The film had top notch talent behind the camera, too. The great John Ford directed, and the script was written in part by Robert Riskin, Frank Capra's favorite screenwriter.*

This is a nice little comedy that will keep you surprised throughout.

*He wrote the scripts for most of Capra's most famous films other than It's a Wonderful Life, and that film cribs quite a bit from Riskin's script for American Madness (about a banker who cares a lot about the little guy, who has a run on the bank, but is saved when all his friends show up and give him the money he needs. Sound familiar?).

Posted by Chuck Rothman at 7:38 PM