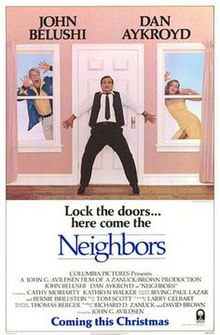 (1981)
Directed by John G. Avildsen
Written by Larry Gelbart
Based on a Novel by: Thomas Berger
Starring: Dan Ackroyd, John Belushi, Cathy Moriarty, Kathryn Walker
IMDB Entry
I may be the only person in the world who liked this film, but it's my web page and I can feature what I like.
It helped that I read the book.  Neighbors was based on a novel by Thomas Berger, a clever writer best known for his novel Little Big Man (made into a movie starring Dustin Hoffman) and the reversal of sexes novel Regiment of Women. Neighbors an odd novel. Earl Kease lives a perfectly ordinary life in the suburbs, until the new neighbors show up.  Harry and Rarmona are wild, unpredictable, and possibly psychotic.  Or maybe it's Earl who is psychotic. Harry and Ramona, and Earl's wife and daughter behave irrationally -- except they insist it is Earl who remembers things wrong.  It's arbitrary and quite funny with the humor coming from the fact that the characters seem to change personality for no reason at all (except maybe that Earl's grip on reality isn't all that firm).
The movie was directed by John G. Avildsen, who earlier did Cry Uncle, and I suppose it was something of a coup to get Dan Ackroyd and John Belushi. The casting of Ackroyd as Captain Vic (the character of Harry, renamed from the book) was especially brilliant:  he matched the character in the book perfectly.  Belushi played Earl, and was quite good as the quiet, normal guy. Oddly enough, the two actors switched parts, but, despite the critics' comments that Belushi would have been better as the wild man Vic, it was very a wise decision.  Belushi just didn't fit the image of Vic/Harry, who was a more psychotic wild man than Senator Blutarski would have been.
The movie does appear to be disjointed, partly because of friction between Ackroyd and Belushi and Avildsen. The two SNL veterans didn't care for Avildson's comic ideas (nor those of writer Larry Gelbart, who also cowrote Movie Movie). It's also due to the fact that the movie tried to be true to the novel, where the characters did bizarre things supposedly without any logical motivation.  That may be a turnoff.
Cathy Moriarty, fresh from her Oscar nomination in Raging Bull is also perfect as the sexy Ramona.  The movie was John Belushi's last, alas.
If you sit back an accept the idea that the characters are not going to behave logically, though, it's a funny and entertaining film.