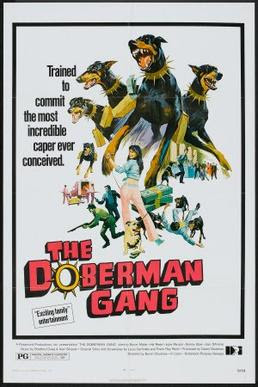 There's a category of movies and TV shows that I sometimes use:  Better Than It Has Any Right To Be. It applies to films that on the surface seem undistinguished, with a cast of unknowns, a silly story line, routine direction, etc. Yet, even though all the elements seem wrong, somehow it manages to be entertaining.

A classic example is the TV show Sabrina the Teenage Witch. The writing was pedestrian, the characters not particularly funny or interesting, and they had the phoniest looking mechanical cat in the history of film.  But, if you sit through a half hour, you'll find you enjoyed it and even laughed from time to time..

8The Doberman Gang is Better Than It Has Any Right To Be.  It's a low budget film with a cast of unknowns -- some successful TV actors, but no stars and only Julie Parrish has ever had a major part (in the forgotten Good Morning World, a footnote because Goldie Hawn was a regular -- her first film or TV role).

The concept is interesting, at least.  A small-time crook decides the way to commit the perfect crime is to have it done by Dobermans.  Yes, the dogs.  After all, in 1972, Dobermans were considered the meanest of dogs (if they remade it, it might be The Pit Bull Gang). And Eddie Newton (Byron Mabe) figures they can be trained to rob a bank.

So he and a gang of small-time crooks steal a group of Dobermans (and one bulldog), and trains them.  The film shows the process, as well as the relationships among the crooks, as the dogs are taught what to do.

I probably would never have bothered with it, but my girlfriend at the time was a real dog lover, so anything with a dog in it got her attention.  And when you're dating, you'll sit through a lot of things that you wouldn't bother with otherwise.  Still, this was well worth the time, most notably for the twist at the end.

Director Byron Chudnow went on to direct The Daring Dobermans, The Amazing Dobermans, and Alex and the Doberman Gang(do I detect a pattern here?).  He was also credited with Kwaheri, which the Medveds skewered in "Son of the Golden Turkey Awards" for its circus of an ad campaign.

I can't vouch for the sequels, but if you're looking for a pleasant bit of fun, you can do much worse than The Doberman Gang.