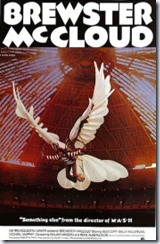 The late Robert Altman is one of my favorite directors, one of the few in the past 30 years that deserves to be among Andrew Sarris's Pantheon directors.  But he could be somewhat hit or miss.  For every M*A*S*H or Nashville or The Player, there were things like Indians or Quintet or Pret a Porter.  And hidden within his output were a few gems that have gotten lost in the shuffle.

One is Brewster McCloud.  This was Altaman's first film after his breakthrough in M*A*S*H.  It had a large cast of newcomers (it was Shelley Duvall's first screen role) and veterans (Margaret Hamilton, best know as the Wicked Witch of the West) and an antiestablishment bent.  But ultimately, it was a fable about dreams.

Bud Cort (a year before Harold and Maude) plays Brewster McCloud, a man obsessed with building a flying machine and taking flight in the Houston Astrodome.  Sally Kellerman is Louise, his muse, helper, and hit man, and who just might be a fallen angel.  People in his way are found dead and covered in bird crap:  Margaret Hamilton's Daphne Heap (whose corpse wears a pair of ruby slippers), Stacy Keach's Abraham Wright (Wilbur and Orville's brother).

Detective John Shaft (Michael Murphy) is out to find the killer, abetted by John Schuck as Officer Johnson (one of the vastly underrated actor's best roles).  Shelly Duvall plays Brewster's love interest, and the entire show is presided over by the Lecturer (Rene Auberjonois), who, as he talks about the habits of birds, becomes one himself.

The movie is funny, with some clever in-jokes and parodies in addition to telling the fable.  Cort is wonderful, earnest and weird as he single-mindedly go about trying to fulfill his dream. Auberjonois as the lecturer is unforgettably weird.

The movie isn't for everyone (few Altman films are), but it is among one of his best. Altman made a very large number of films for someone directing in the 60s and beyond, a number that's even more surprising because he had so few hits.  But he could attract big name actors who loved to work with him, and, while sometimes hit or miss, they could produce gems like this one.

Posted by Chuck Rothman at 8:10 PM