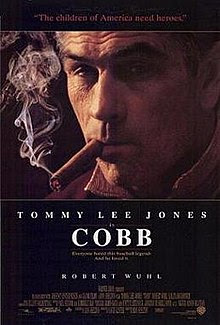 I've always been a fan of Ty Cobb.  Oh, sure, he was nearly psychotic,
but his record on the baseball field was unsurpassed.  Cobb was a nasty racist bastard, but a fascinating character.

And Cobb does him justice.  It's a fascinating film.  Shelton (best known for Bull Durham) had an interesting take:  he would show Cobb at the end of his life, when he was writing his autobiography a few years before his death.  Cobb chose a sportswriter Al Stump to work with him — even though he had never met Stump (it's believed he chose him because Stump was a top writer at the time).  The early part of the movie is based on one of Stump's articles, describing a terrifying drive from Cobb's mountaintop home to visit Reno, Nevada.

Tommy Lee Jones is superb as Cobb.  The character is essentially a bastard to everyone around him.  But he's a funny and entertaining bastard.  In a way, he's like Gregory House (from the TV show), though he is far less likeable.

Still, at odd moments, little hints of humanity are shown.  The scene with Lolita Davidovich starts out frightening, and becomes sad and pathetic.  As portrayed, Cobb is aware of what a jerk he is at times, but can't behave in any other way.  And he does have a positive side, like what he does to help Mickey Cochrane.

Wohl is also great as Stump -- a man fascinated and repelled by Cobb, and who discovers he's becoming like him.

The movie went nowhere.  I happened to see Ron Shelton at a showing of the film, and in the Q&A session afterwards, he was asked why.  He couldn't explain it.  The film opened to great reviews, had a recent Oscar winner in Jones, and was quite entertaining.  But it's likely the subject matter was the issue.  Cobb was unpleasant, and there were too many people who had never heard of them (alas, baseball is no longer the national pastime: a loss for the nation, but I'll write about that at another time).

What was also interesting was Shelton's answer to another question.  In the movie, Stump is secretly making notes on Cobb — writing down the truth that couldn't be put into the biography. Someone asked Shelton if the film was accurate (a concern that I find completely stupid, but that's another essay).  Shelton said it was — except for one thing.  In the movie, Cobb found these notes; in real life, he did not.  And Shelton said, "Once the notes were introduced, I couldn't go without Cobb finding them."  The perfect answer, and one more reason why being accurate is not the point.

But, in any case, even if you like accuracy, give the film a shot.

Posted by Chuck Rothman at 6:40 PM