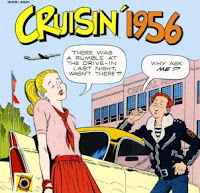 Nowadays, when you have your pick of oldies channels on SiriusXM, and when oldies stations have been a part of terrestrial radio for decades, it’s hard to understand what the situation was back in the 1960s. Oldies were considered disposable; top 40 radio rarely played anything more than a year old.* But in 1970, record producer Ron Jacobs figured the way to market them:  the Cruising series.

Jacobs grew up in Hawaii and started working in radio at the age of 15. By 1962, he was working as a DJ and program director, eventually working his way up to KHJ in Los Angeles and was noted for pushing his stations to number one in the market. After that, he moved on to produce American Top 40 with Casey Kasem and began the dream project of Crusin’ in 1970.

The concept was as brilliant as it was simple. Jacobs chose the top singles from a particular year and  put them on a disk with the voice of well-know DJs of the era, as well as advertisements, so it was just like listening to a radio show. The first entry Cruising 1956 was typical. Robin Seymour, who was working in 1956, was the DJ:

As you can see, it was clearly a radio show of the time. Some songs that are classics, but also a few that have faded from memory, even at the time the records were release.

Jacobs continued with the series over the next few years, each record advancing a year and with a different DJ. 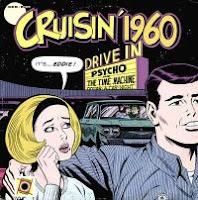 One of the charms of the series were their covers. Done in comic book style, they showed scenes from the lives of Peg and Eddie. The two would age and change (Hairstyles especially) as time went on.

The series continued to several years. The first series (1956-1962) was successful enough that Cruisin 1955 and Cruisin’ 63 were produced a year and a half later. and in 1973 four other volumes were produced, taking things to 1967. Later volumes were added in the late 80s and early 90s.

Posted by Chuck Rothman at 8:42 PM