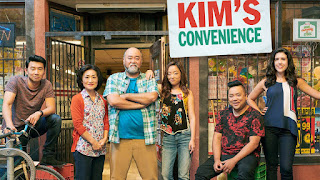 Canadians are, of course, familiar with US TV shows, since they are often broadcast directly to them (and American TV is popular all over the world). But Americans are less familiar with Canadian shows. Netflix and other streaming services, hungry for content, are now brining them to America, so people can enjoy the delights of shows like Kim’s Convenience.

The title refers to a convenience store run by the Korean-Canadian family in Toronto. Sang-il “Appa” Kim (Paul Sun-Hyung Lee) is the head of the family and runs the store the way he sees fit. He’s very traditional in his outlook and not afraid to speak his mind. His wife Yong-mi “Umma” (Jean Yoon) is kindly and something of a peacemaker, but is not above jumping in to help (or inadvertently hinder) the rest of the family, especially their daughter Janet (Andrea Bang) who is in her 20s and struggling to make a life of her own. Their son, Jung (Simu Liu) is estranged from the family after getting caught doing minor crimes as a teenager, but had turned his life around, still speaking with Janet. He works at a car rental company, with his feckless best friend Arnold “Kimchee” Han (Andrew Phung) and his boss Shannon (Nicole Power), who had an awkward crush on him.

The show depends are the characterizations for the humor, especially the portrayal of Appa, who runs the store the way he sees fit, and who is not willing to indulge a difficult customer (from his own definition of difficult). He tries to lay down the law to Appa and Janet, but he ultimately becomes a grumpy old softy.

The actors are all fine, able to show their quirks and flaws but rarely being too ridiculous or obviously milking the laughs.

Kim’s Convenience has run for four seasons so far and is an utter delight from start to finish.

Posted by Chuck Rothman at 2:40 PM