The Cook, the Thief, His Wife, and Her Lover 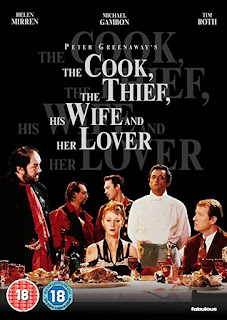 Peter Greenaway is not for everyone.* Originally a painter, he brings an artist’s sensibility to the screen, very stylized. He’s also not afraid of taboo concepts, especially sex, violence, and cannibalism. The Cook, the Thief, His Wife, and Her Lover. Is a fascinating portrayal of his interests.

Richard Borst’s (Richard Bohringer – the Cook) is a chef, whose restaurant is taken over by Albert Spica (Michael Gambon – The Thief), a wealthy and crude gangster who eats there each day. Spica is sadistic, cruel, and intimidating, especially to his wife Georgina (Helen Mirren), who, spotting Michael (Alan Howard – Her Lover) in the restaurant, starts a torrid affair with him in one of the restaurant’s rest rooms. Of course, Spica eventually learns of the affair and kills him in the most humiliating way possible. But Georgina gets revenge.

The story is visually sumptuous, with rich colors and everything staged like it was in a classical painting (sometimes specifically so). There is a theme of colors; as people walk from room to room, their clothing changes to match the color of the room.

Gambon is excellent as a man you want to hate – a crude bully who thinks he can get away with whatever he wants. Helen Mirren is always great and this role lets her show her as a woman who gets tired of her husband humiliating her and turns on him.

The movie is well regarded, and certainly a great on, but clearly not for everyone’s taste.

Posted by Chuck Rothman at 8:07 PM