I’m a major Marx Brothers fan, but there’s been one thing of theirs I never expected to see.  It was the last time they actually were on screen together, in a 30-minute silent comedy that’s primarily a vehicle for Harpo (of course) and Chico.

The plot is simple. Nick (Harpo) and Harry (Chico) are shown stealing a bunch of odd items from various stores.  They then go to a secluded spot and repaint their car to look like a police car.  It turns out to be a plot to steal jewels from the jeweler. 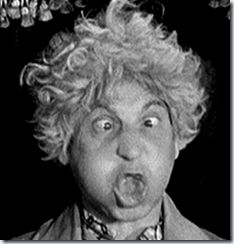 But forget the part.  The show* is an excuse for sight gags, some new, some old.  Harpo makes a gookie**, and there are sight gags throughout, some amusing, others not so. It’s great seeing the two of them on the screen, and Groucho appears in the final scene and utters the only line of dialog in the half hour.

The film was directed by Mitchell Leisen, a top film director in the 1930s who had worked with W. C. Fields, Jack Benny, Burns & Allen, and other top stars.

Like most TV of the 50s, the show was ephemeral and, despite the Marx Brothers name, didn’t seem to be aired again.  It came back in the DVD era, and can currently be seen online at ShoutTV.com.

It’s certainly not classic Marx Brothers, but completists and fans may want to give it a look.

**A face he made in just about every Marx Brother’s movie.  It’s named after a cigar roller of their youth who made the face unconsciously while working.

Posted by Chuck Rothman at 7:03 PM

I am also a huge fan of the Brothers Marx. They are my fave comedy team in movies hands down.

Interesting how the curly wig which Harpo wore was red. Yet in movie posters and cartoons his hair was always depicted as blonde for some reason.

Chico's name is often mispronounced by people as Cheeko.

I believe there is a scene in the movie "The Way We Were"where a Marx Brothers themed party is being held at a swanky place.Always bugged me that everyone at the party was dressed as either Groucho or Harpo.
Chico was ignored.