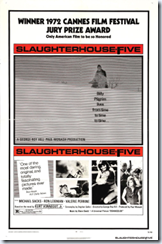 Kurt Vonnegut was a favorite author of mine, but, other than Mother Night, movies of his books were few and far between.   In 1972, George Roy Hill took a swing at his most acclaimed novel, Slaughterhouse-Five.*

As in the book, Billy Pilgrim (Michael Sachs) become unstuck in time, traveling backward and forward to events in his rather eventful life. Billy is captured by aliens (where he meets Hollywood starlet Montana Wildhack (Valerie Perrine)), but most of the movie (like in the novel) covers the bombing of Dresden in World War II.**

What sticks in my mind was the performance of Eugene Roche ad Edgar Darby, one of Pilgrim’s fellow prisoners. He is absolutely amazing as Roche, a decent and very likeable guy that got caught up in the madness of war.  It was the second time I noticed him; he had made a series of commercials for Ajax Dishwashing Liquid as a “dishwashing expert.”  But the qualities that served him well as a pitchman – most importantly, his likeability – made him just perfect in the role.

There were other newcomers in the cast.  Valerie Perrine made an impressive entrance, and started out on a career of playing sex symbols, but with an intelligence (even when the character wasn’t) of a serious actor, and was also memorable in Steambath.  It was Michael Sach’s first film and an early role for Ron Liebman.

Vonnegut praised the adaptation, and the film did OK business, but wasn’t a major hit.

**Vonnegut was a witness, being a POW there when the city was firebombed.

Also of note in this movie, the singer/activist Holly Near played Billy's daughter, Barbara Pilgrim. Near has had a long career in folk music and social activism, and a bit of an acting career during the 70's-80's.

Not on topic for this post, but I just wanted to let you know that I really enjoy reading your blog. It has turned me on to some great movies, TV shows, and music that I probably wouldn't have heard of otherwise. Thanks.