A 60s sitcom can go pretty far with a catchy theme song. Gilligan’s Island has become a cultural touchstone because of its song. And one of my favorites is from an early 60s comedy that was pretty good on its own: Car 54, Where Are You?*

The show was conceived by Nat Hiken. Fresh from his success with The Phil Silvers Show (aka Sgt. Bilko), he went to another group of men in uniform: the New York city police force.

The show follows the life – you couldn’t really call them adventures – of Gunther Toody (Joe E. Ross) and Francis Muldoon (Fred Gwynn), two partners who are also best friends. Gunther was married to Lucille (Beatrice Pons) while Francis was a bachelor. Their boss was Captain Paul Block (Paul Reed). Toody and Muldoon didn’t often deal with any actual crimes, with the show focusing on their relationship, life as a cop, and their home life.

The show was a success from the start, getting good ratings** and winning three Emmys. In the second season, the cast added Al Lewis as Leo Schnauser, but the show ended after that year.

Fred Gwynn, of course, moved on to be Herman Munster (with Al Lewis) and a TV icon. But that part really didn’t fit the man. A graduate of Harvard – where he was editor of the Harvard Lampoon, he also was an accomplished artist, writing and illustrating The King Who Rained and its sequel A Chocolate Mousse for Dinner. He was able to show a more subtle comic gift as the judge in My Cousin Vinnie.

As for Joe E. Ross . . . well, his life was a mess. He had started out as a burlesque standup comic, and his act was as blue as it could be. Hiken, however, liked the way he looked and hired him for Phil Silvers and Car 54. The success of the show went to his head. He became arrogant and didn’t bother to learn his lines. Hiken even planned to drop him and replace him with Al Lewis, but Ross begged to stay in the role. Even so, he alienated everyone on the set and went back to comedy when it was over. He later returned to TV with It’s About Time, mostly because its producer didn’t talk to anyone who worked with him.

However, Ross was excellent as Toody, his catchphrase “Ooh, Ooh”*** making him a hit. He wasn’t really a strong actor, but he made the show work.

One thing I noted is the willingness to cast Black actors as police officers. It didn’t raise a lot of attention at the time, but the fact that the police force was integrated was something you hadn’t seen on TV back then.  Nipsy Russell and Ossie Davis were not more than background actors with a handful of lines each show, but seeing Black people in the background as though it were no big deal was a big step forward.

The show was shot in New York City. Police cars of that era were painted green and white and, in order to keep people from thinking Car 54 was a real police car, it was painted red and white, which looks the same on black and white film. It helped avoid confusion.

The show pioneered using a different opening sequence. Toody and Muldoon would be doing different things while driving. It wasn’t changed every show (like The Simpsons) but it did change every few episodes.

The show only ran two seasons. The stress of running all aspects of the show, coupled with having to deal with Ross, affected Hiken’s health and he died in 1968. But the short run meant it was rarely shown in syndication.

**Helped by its timeslot after Walt Disney’s Wonderful World of Color and before Bonanza.

***It seems to be a phrase he often used in real life, too. 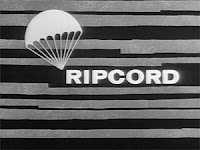 In the 50s and early 60s, local station had to look to find programming in the early evening. Network prime time began at 7:30 weekdays, and there was often only a half-hour news broadcast at 6:00. So various producers jumped in to provide programming for the missing hour, half-half hour dramatic shows that were cheap for them to produce. Ripcord was one of these.

Much like Whirlybirds, the show highlighted a new bit of aviation technology – the parachute. Used in the military before that, parachuting became more mainstream, and producer Ivan Tors jumped onto the trend.

The show featured the adventures of Ted McKeever (Larry Pennell) and Jim Buckley (Ken Curtis), who ran a skydiving business. Most of their assignments was to use skydiving as a way to get to places where other forms of transportation could not.

One striking thing about the show today is that it used real stunts: people were actually skydiving.* It had an element of danger. Indeed, one stunt – a transfer from one plane to another, went wrong and the two planes hit each other and crashed to the ground. Luckily everyone was safe, skydiving to the ground, and the footage was used in a couple of later episodes.

By 1963, fewer of this type of show was being produced. Syndicated game shows – which could be made more cheaply – replaced the dramas, and the slots for them started drying up. The show was cancelled after two seasons. 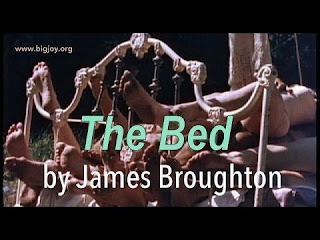