Every few years, some legal case is dubbed “The Trial of the Century”:  The Lindbergh Kidnapping, the O.J. Simpson Case, the trials of murderers Beulah Annan and Belva Gaerner,* for instance.  As time goes by, these trials become forgotten, and new ones come along.  But for me, the Hall-Mills Murder Case is up there among the most sensational of the 20th century.

It started with the discovery of two bodies in a field in New Jersey, a man and a woman, both shot in the head; the woman had had her throat cut first.  The bodies had been posed after they died, along with some torn up love letters. They were found to be Edward Wheeler Hall, an Episcopal minister, and Eleanor Reinhardt Mills, a singer in the church choir.  Both Hall  and Miss were married.  But not to each other.

The investigation was botched from the start.  Crowds trampled the site (known as a local lover’s lane) before the police could figure out who would be in charge, and evidence was destroyed.

Of course, this was the heyday of sensational journalism and the combination of sex, adultery, and murder was striking sensationalist gold.  All the New York papers were on top of the case and the trial

Ultimately, the prosecution charged Frances Hall (Hall’s widow) and her two brothers, Henry Stevens and William “Willie” Carpenter, saying Frances got Henry, an expert marksman, to do the crime.

The trial was a circus, with the press sensationalizing every moment.  Forty-seven newspapers from all over the US were there to report on the trial, and there were requests for over 100 seats for the press. 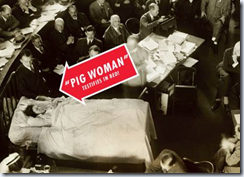 The key witness for the prosecution was Jane Gibson, though she quickly got the sobriquet “The Pig Woman” because she raised hogs.  She supposedly saw the murder going down.  Her testimony was more sensation, especially since she was in the hospital with cancer and couldn’t walk.  Her hospital bed was moved into the courtroom and she testified lying down.

Love letters between the two victims were entered into evidence

When it came time for the defendants to take the stand, they were ready.  Henry Stevens, who was an expert marksman, had witnesses putting him miles away at the time of the crime, which didn’t help the prosecution.

But Willie was the star.  He had a reputation as something of a character:  he loved to follow firetrucks and was considered a bit “slow.”  But he turned out to be a good witness – polite and straightforward.

Ultimate, the verdict was “not guilty.”

The ballyhoo slowly died down, as other sensations took its place, and, like most “trials of the century,” it was soon forgotten.

The murders are still unsolved.

Posted by Chuck Rothman at 6:51 PM