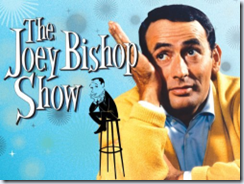 The Rat Pack is back in style and people know all about Frank Sinatra, Dean Martin, and Sammy Davis, Jr., who have become Las Vegas icons. But in their original incarnation, there were two others:  Peter Lawford, who is best known these days (if at all) for marrying into the Kennedy clan, and Joey Bishop.

Bishop was a comedian who actually wrote most of the jokes for the rest of the pack.  After he turned to acting, he caught the attention of Danny Thomas, who put him into an episode of Make Room for Daddy, as Joey Mason, a bumbling Hollywood PR agent.  The next year, this setup (with the character renamed Joey Barnes) formed the basis for The Joey Bishop Show.

It wasn’t a success. It stumbled along with mediocre ratings the first year. NBC gave it another chance, with the request it be revamped. So, in 1962, everything had changed.*  Bishop was the only cast member retained and the concept was that he was a talk show host who lived in New York. He was married to Ellie (Abby Dalton) and was friends with his head writer Larry Corbett (Corbett Monica).  The cast was rounded out by Mr. Jilson (Joe Besser), and Hilda (Mary Treen), their maid. 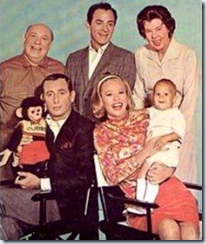 The show was filled with gentle comedy. The jokes may have worn a little thin, but the stories hold up surprisingly well.  Barnes is a decent guy with a sense of humor and Bishop’s relaxed and subtle style – he never appeared to work to be funny – was charming to watch.

The cast was a delight.  I think I had a little crush on Abby Dalton; her Ellie was well rounded and very grounded.  Corbett Monica – a successful standup comedian, too,** and had some of the sharper line.

Joe Besser, of course, is a familiar name.  He was the fifth of the Three Stooges, a replacement after Shemp died. He is not well regarded by Stooges fans, but he was usually the best thing in the mostly recycled films of their later career.  I remember liking Mr. Jillson mostly because he was one of the Stooges, and he was better here than with the other two.

The show moved to CBS for its final season.  In 1967, Bishop tried to compete with Johnny Carson with a late night show that ran for two seasons.  After that, he worked occasionally, but never headlined.

It’s too bad.  Once it found its stride, the show is one of the best of its era.

**I was delighted to see him as one of the comedians talking in the deli in Woody Allen’s Broadway Danny Rose.

Posted by Chuck Rothman at 4:50 PM

The Joey Bishop Show is currently playing on both Retro TV and Antenna TV.

Joey Bishop was about as funny as a radiation leak at a preschool. They went through all kinds of contortions to keep this unfunny person on the air, and the show limped along for four years. But it was never a hit.

Philbin was on his talk show several years later. He wasn't on the sitcom.

This is a great show. Season 1 was so-so, but when they completely changed formats starting with season 2, it was a very good, solid show with a great cast.

Another cast member made the jump to Season 2, Joe Besser. The former Stooge played a character named Jillson, who was a LA. neighborhood mailman in the first season and somehow became a NYC apt house super in the subsequent episodes.

I thought Joey Bishop was funny. I thought he was a good actor. He didn't overact like a lot of actors do.