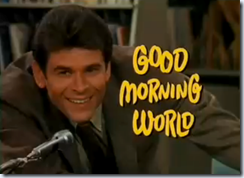 Goldie Hawn rocketed to stardom after appearing on Rowan and Martin’s Laugh In. The story of her getting the role is well known: she was a struggling actress who blew a line at her audition, and giggled at her own mistake. The producers loved it, and gave her a part and her stardom began from her very first regular TV gig . . . except that it’s wrong.  Hawn had already moved up the ladder of success with a regular part in the CBS comedy, Good Morning, World.

The show had a great pedigree.  It was created by Dick Van Dyke Show writers Bill Persky and Sam Denoff and had as executive producers TV greats Sheldon Leonard (Make Room for Daddy, Andy Griffith, I Spy) and Carl Reiner (The Dick Van Dyke Show). It was designed as a vehicle for Ronnie Schell, who seemed on the verge of stardom after a stint on Gomer Pyle U.S.M.C.).

The show was about two morning DJs – David Lewis (Joby Baker) and Larry Clarke (Schell).  Lewis was married to Linda (Julie Parrish), while Clarke was a bachelor.  Lewis and Clarke often run afoul of their by-the-book boss, Roland B. Hutton (Billy De Wolfe). David and Linda’s next door neighbor, Sandy Kramer (Hawn), acted as a sounding board for Linda and a sometime date for Larry. 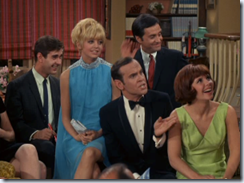 The stories showed how the two men balanced their work life (where they were “crazy” DJs of the time) with their home life. Not entirely innovative, but Persky and Denoff were among the top writers of sitcoms in their day, writing many classic episodes of Dick van Dyke and That Girl, so the show was consistently funny.

During the show’s run, Laugh-In  was cast and Goldie left. It’s unclear if any of her episodes were run while she was appearing on Laugh-In; if they had, she would have joined the list of people who appeared in series on two different networks at the same time (she certainly qualifies if it’s in the same season).*

Despite a good time slot, the ratings were never particularly good for the show, and it was canceled after one season.  Schell returned to Gomer Pyle and the sitcom went to an obscure corner of sitcom heaven.

Posted by Chuck Rothman at 7:29 PM

I remember this as being a funny and well done production.

Billy De Wolfe was worth the price of admission alone.

Schell was interviewed and commented that one of the challenges regarding doing the series was Baker's trouble with memorizing scripts.