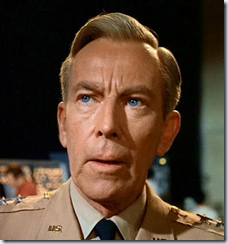 Character actors may never be the star, but they are essential to the success of a movie. They have to make an impression that they’re more than just someone walking on and speaking a line, but not be overwhelming.  Sometimes they just fade into the background afterwards.  And Whit Bissell was one of the best.

Bissell took to the theater early, appearing on Broadway in 1933, when he was 24.*  He worked very consistently on the stage for over ten years, then tried his hand a films.  Many of his early roles were uncredited; his first credit was in Brute Force as one of the prison guards.  From then on, there was no stopping him, and he’d appear in 6-10 movies a year.  In the mid-50s, he started to find the niche in which he’s best remembered:  science fiction films.  Starting with Target Earth, he fell into the characterization that became his trademark:  a scientist or other authority figure who was there to help the hero.**

He had a small but pivotal role in the classic Invasion of the Body Snatchers as one of the two actors in the frame tale.***

As the studio system died, he switched to TV as an all purpose actor.  Despite being in the medium almost from the beginning, he didn’t have any recurring roles until 1965 (a seven-episode stint in Peyton Place).  His first regular role wasn’t until the next year, where he played General Kirk**** in The Time Tunnel.  He also appeared in Star Trek’s “The Trouble with Tribbles” as the manager of the space station where the trouble began.

Bissell continued to work regularly in TV until the early 80s, when he seemed to retire.  Overall, he appeared in over 300 shows and movies, making his face one of the most familiar of all actors.

**I note that in The Atomic Kid, he was billed as “Dr. Edgar Pangborn.”  Pangbourn had a couple of novels out at this time, though not his masterpiece Davy.

***The two scenes – at the beginning and at the end of the movie – were added to the film because the studio wanted a more hopeful ending.  Director Don Siegel hated the change.

Posted by Chuck Rothman at 7:31 PM

A fine tribute to a great and underappreciated actor. If you'd enjoy seeing a Whit Bissell tour de force, check out the opening episode of Rod Serling's short-lived Western series THE LONER. Bissell gives an outstanding performance in "An Echo of Bugles." Bissell's is always a welcome face in any old show I'm watching.

Agree. He frequently appeared on Perry Mason in a wide variety of characters and was always excellent.

One of my favorite character actors.

You'll also see him in a number of Rifleman episodes. A very familiar face who makes a great contribution to the episodes

In the 1960 Movie The Time Machine he was excellet.