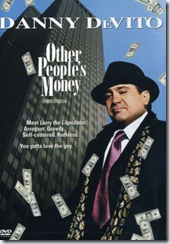 Corporate takeover artists are usually the villains of a film, but sometimes there is a more nuanced view of the issues.  Other People’s Money deals with as nasty a corporate raider as you’ve ever seen, but doesn’t paint him entirely as the villain.

His name is Lawrence Garfield (Danny DeVito) – known in the business as “Larry the Liquidator” for his penchant for finding overvalued companies, buying them up, and then selling off their assets.  His next target is a small company, New England Wire & Cable, which is a major employer in the small town it is situated in.  Its president, Andrew “Jorgy” Jorgenson (Gregory Peck) is the type of enlightened company head we like to see in films (think George Bailey).  He resists Larry, hiring his stepdaughter Kate (Penelope Ann Miller) to convince him to back off.  Of course, that doesn’t go well, and there is a ton of quiet and nasty behind-the-scenes maneuvering and double crosses, leading to the climactic shareholders meeting where both Jorgy and Larry make their cases.

The movie is impressive because it’s not all black and white.  Both Jorgy and Larry have some strong points to be made, and the film tries to get away from the cliches.

DeVito is perfectly cast as the crude and overbearing Larry, a man who is completely ruthless when money is concerned..  Gregory Peck brings his usual quiet dignity to Jorgy.

Director Norman Jewison had a long history in Hollywood when the film was made, directing films like In the Heat of the Night, Fiddler on the Roof, Jesus Christ Superstar, Moonstruck and many others.  This wasn’t a big hit, but I do like the way they avoided the easy cliches of the situation.

Posted by Chuck Rothman at 8:10 PM