It Happens Every Thursday 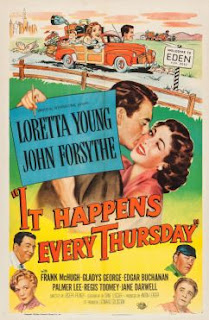 Even the most obscure film can have some wonderful delights. It Happens Every Thursday is a small, unassuming movie that makes them most of what it had, and which has things that might surprise you.

Jane and Bob MacAvoy (Loretta Young and John Forsythe) are a couple with a young son and a baby on the way. Bob is a newspaper reporter who has dreams of publishing a small-town newspaper. When Jane spots a newspaper up for sale in California, she sees it as a dream come true, and convinced Bob to uproot themselves to buy it.

When they get to California, they realize that the advertisement . . . exaggerated. The circulation figure was inflated by real estate agent Fred Hawley (Frank McHugh), and the photo hides the actual appearance of the rundown building. The paper is operating, with Jake (Edgar Buchanan) and Matthew (Jimmy Conlin) getting it out each week on a press that breaks down regularly.
Jane and Bob decide to stick it out, with various promotions to increase circulation and make money.

The movie is low key* but surprisingly modern in many respects. One fascinating scene is when Jane goes to businessman Myron Trout to sell ad space, where he starts hitting on her. Jane deflects him in a way that is probably familiar even today.

The way Jane’s pregnancy is handled is also different. She is shown clearly pregnant in the opening scenes, but it is not referred to until several minutes of film time later. And while there is a scene where she gives birth,** it is early one and not a centerpiece of the film.

What’s also interesting is that Jane is clearly shown as the one taking charge. She comes up with the ideas, the money, sells the ads, comes up with promotion, and much else. She is the go-getter in the family, which is unusual for the time. And she is by no means perfect, making mistakes but managing to help Bob recover from them.

There is also a subplot about what is clearly supposed to be a bordello, also surprising given the time frame.

The cast is just fine. Loretta Young is charming and lively throughout, while Forsythe is quietly practical. Of course, it’s great to see Edgar Buchanan, playing the same sort of character as he played in Petticoat Junction.  Frank McHugh, a film veteran at the point is fun to see, even if the role doesn’t give him much to do.

The film was Loretta Young’s last. She moved on to television, including hosting her own anthology show. And several of the actors also moved on to television.  John Forsythe starred in Bachelor Father and did both his own show and, eventually Dynasty.  He also was the voice of Charlie in Charlie’s Angels. Jane Darwell, who plays one of the townspeople also switched to TV, but did have one final memorable movie role: the lady feeding the birds in Mary Poppins.

Director Joseph Pevney also moved to TV and directed several of the best Star Trek episodes, including “The Trouble with Tribbles,” “City on the Edge of Forever,” “Amok Time,” “The Devil in the Dark,” and “Wolf in the Fold.”

While the movie is clearly not a classic, there’s plenty to enjoy.