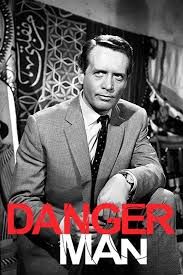 The idea of a TV show about a secret agent was still new in 1960 when Ralph Smart decided to base a series on it. The result, Danger Man, had a long reach in popular culture.

It was the story of John Drake (Patrick McGoohan), an American secret agent who was affiliated with an organization that was strongly hinted at as being NATO. Drake was sent to crisis points, going from one mission to another with an ironic sense of humor and using his wits to get out of trouble.

The show made McGoohan a star. Drake was resourceful, witty, and smart enough to come up with ways to thwart even the cleverest of villains. He in some ways defined the secret agent in the 60s* – but also was quite different.  He didn’t use a gun, and was had no time for seducing women.

The show was often shot on location, adding verisimilitude to the proceedings.

McGoohan became a star playing the role, but not in the US.  Though US networks were still open to running UK shows, and CBS did broadcast it as a summer replacement, it was barely a blip on US TV.  The show stopped production after two years.

It would have been the end of it, but James Bond happened and suddenly spies were big. Ralph Smart retooled the show, stretching it from a half-hour to an hour, Drake became English, and the title was changed to Secret Agent. It was soon picked up by CBS, and, helped by a memorable theme song, because a success in the US, running three seasons before McGoohan tied of the role.**

McGoohan then created his own piece of TV history – The Prisoner, about a secret agent who resigned his job. Though McGoohan denied any connection, people tended to think of the show as an extension of Secret Agent. There are many connections and coincidences that make it a viable theory, however.***

Due to the fact that it’s a half hour show shot in black and white, Danger Man has had only spotty reruns. The first season is currently on Shoutfactorytv.com, so you can give it a look there.

**It was replaced by Mission: Impossible.

***Most interesting is the fact that Danger Man shot an episode in the Hotel Portmeirion in Wales, the location for The Prisoner. Also, one episode of Danger Man was titled “The Prisoner,” though that referred to someone else.

Posted by Chuck Rothman at 6:23 PM

We've been watching it on Amazon Prime. I love the half hour format, all action, no time for fluff.

The Prisoner was in fact the character portrayed in Danger Man. It was only because a financial settlement would have had to have been paid to the Danger Man creator that John Drake was not officially the Prisoner.