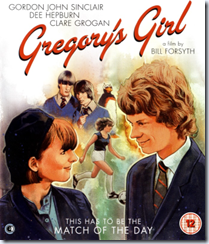 Bill Forsyth made his name as a director of low-key and charming comedies like Comfort and Joy and Local Hero.  He concentrated on character, not situation and his stories always had a quirky sensibility. This first became apparent with his very first feature, Gregory’s Girl.

Gregory (Gordon John Sinclair) plays on his school’s football* team in Glasgow, Scotland.  The team isn’t doing well, so the coach decides to take on Dorothy (Dee Hepburn), who turns out to be an excellent player.  She replaces Gregory on the team, but he doesn’t care – he has a tremendous crush on her.  His sister Madeleine (Allison Foster) asks him to go on a date. She agrees, but it doesn’t go the way that Gregory envisioned.

Now, in most teenage comedy of this nature, you’d expect some slapstick hijinks and sexual innuendo. But this isn’t that sort of movie. The result of the date is so filled with charm about the clumsiness of young love that you end up smiling gently as it unfolds.

Much of the cast came from the Glasgow Youth Theater and few had any acting credits before, and the come across as supremely natural. Sinclair captures the confusion and innocence of high school love** and the embarrassment of trying to figure out the rules.***

The actors never became big names and only Clare Grogan is known in the US to fans of Red Dwarf, where she played Christine Kochanski.  There was a sequel in 1999, Gregory’s Two Girls, that did poorly and was never released in the US.

But the movie is still a landmark in portraying teenagers trying to navigate the intricacies of blooming relationships.

**Probably a bit dated these days with people being exposed to the Internet.

***I will say in among it all, one of my favorite moments is the subplot of two of Gregory’s friends, Andy (Robert Buchanan) and Charlie (Graham Thompson). Unable to deal with the lack of love lives, they learn that Caracas, Venezuela had a shortage of me and figure it would improve the odds.  So they decide to hitchhike there. After several hours and no rides, They realize they have mispelled “Caracas,” and one blames the other for the mistake on the sign which kept them from achieving their goal.

Posted by Chuck Rothman at 6:58 PM