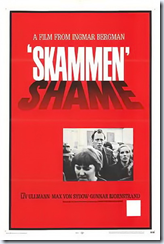 Ingmar Bergman is considered the master of gloom. While he did do some comedies, most of his work was not even close to being cheerful.

I had a major immersion on Bergman in college, taking a film course that concentrated on his works – 19 films in ten weeks.* It fascinating to see him develop over the years.  Shame was one film that really stuck with me.

Jan (Max von Sydow) and Eva (Liv Ullman) are living on the remote farmhouse when it becomes caught up in a war. Troops “liberate” them, though they don’t feel very liberated and Col. Jacobi (Gunner Bjornstrand), the former mayor, comes by, seeming to help, but he has plans for Eva, offering to help them out – for a terrible price. 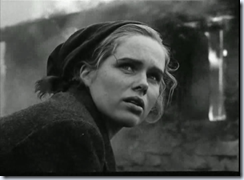 Liv Ullman was one of the 20th century’s greatest film actresses and Max von Sydow is nearly as well regarded, though better known in the US. They make Jan and Eva real and we share their pain.

Gunner Bjornstrand is lesser known, but he was a consistent member of Bergman’s stock company, making nearly 20 films with him. He never gained international acclaim, but I began to look forward to his presence as I watched the Bergman film.

An interesting aside is that the movie was set in the near future, making it science fiction.  It’s one of the best evocations of how war can brutalize bystanders.