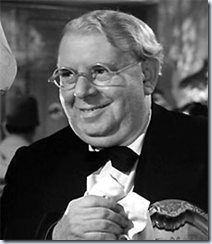 S. Z. Sakall only had to appear on screen, and everyone in the audience would smile, even before he said a thing.  He appeared in almost 50 US films, always playing the same character and always charming the audience.

He was born Gerő Jenő in Hungary and became a successful sketch writer there under the pen name of Szőke Szakáll.*  He moved to the stage in the 1910s, then appeared in Austria and Germany, moving back home when Hitler came to power, and finally moving to the US when World War II began.  His friendship with Joe Pasternak got him work, where he changed his stage name to S. Z. Sakall.

He quickly got work in some of the best films of the early 40s, appearing in Ball of Fire, The Devil and Miss Jones, and Yankee Doodle Dandy (as a prospective Broadway "angel" that is conned into investing in George M. Cohan's first show).  In 1942, he made his best-known appearance as the head waiter Carl in Casablanca. In the late 40s, "Cuddles" was added to his billing by the studio (Sakall didn't like it) and it seemed to fit him perfectly.  When a studio wanted a Germanic comic grandfather figure, Sakall got the call.

His great advantage was his appearance.  He had a chubby face and rotund form and his characters were so charming that it turned him into the loving grandparent most people would want to have.  His accent gave him further personality.  From all accounts, the image of niceness he portrayed was the way he acted in real life.

Sakall continued to work until his death in 1955, playing put-upon Germanic grandfathers to the delight of movie audiences.

Posted by Chuck Rothman at 1:31 PM

James Cagney was an actor that worked quite well with other actors.He was not known for ego or moods or temper.

However,he disliked working with S.Z.Sakall on Yankee Doodle Dandy because he felt that S.Z.was constantly pulling upstaging actor tricks in all of his(Sakall's)scenes.