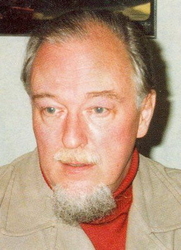 In the late 70s, I was growing tired of science fiction.  I had been devouring it since I saw The Space Explorers  when I was seven.  I would occasionally get away from it for a few months, usually during the school year when I didn't have time for non-school books, but always come back in the summer to read anything I could get my hands on.* But I was feeling that the genre was getting stale, with too much of it things I had seen before.  The ideas and sense of wonder were gone.

Then I happened upon The Shockwave Rider by John Brunner, and my faith in the genre was restored.

Brunner was an incredibly prolific SF novelist, with well over 100 books to his credit.**  He was born in the UK and published his first novel at age 17, and began to crank out books until he could begin writing full time in 1958.  His earlier works were competent space opera -- good reads and nothing more.  But by the mid-60s, he started adding far more depth of characterization and more intriguing ideas into his novels.***

The turning point was The Whole Man, about a telepathic individual who has to deal with his new power and about how the world looks at him.  It showed a new depth of characterization, and gave Brunner his first Hugo nomination.

By 1970, John Brunner was on the list of the top SF writers.  He reached stardom in the field in 1968 with his classic Stand on Zanzibar, a novel about an overpopulated world that uses a complex structure to not only tell the main story, but to give details about the world by small sections that illuminated particular aspects.****  It won a Hugo Award for Best Novel.

Brunner continued with his complex futures and narrative drive on other of his major works, like The Jagged Orbit and The Sheep Look Up. 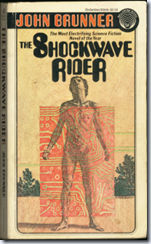 The Shockwave Rider in 1975 was his last classic novel (though he continued with several very good ones).  It probably impressed me because it was cyberpunk before cyberpunk was invented, the story about a man caught up in a fight against an oppressive US government and surviving because of his computer skills.  The technology is dated (he uses touchtone landline phones), but it was far advanced for the time, and like nothing I had ever read.  Brunner even coined the term "computer worm" for the novel.

I am also a fan of his Total Eclipse, about an attempt to discover why an alien race went extinct, and which has some rather frightening implications for the human race.  In addition, his lighter The Infinitive of Go was a great concept and story using the idea of the transporter that doesn't work quite the way it does in Star Trek.

Brunner died in 1995, suffering a heart attack while attending the World Science Fiction Convention in Glasgow.  It was a sad loss to the field and to the cause of imagination.

**Asimov's of course, reached nearly 500 books, but Brunner had far more novels.  Asimov also padded his total by being the editor of a book, where his main contribution was writing an introduction and lending his name.  Brunner tended to repacking his books under different titles, but I'm pretty sure he's still ahead of Asimov.

***In a way, his career path paralleled Robert Silverberg, who had the reputation of being something of a hack in his early days.  At a certain point, Silverberg decided he had made enough on hackwork to live comfortably, and announced he would write more serious sf novels.  Some people in the field thought it a joke, but he quickly became a multiple award winner for some great short stories and novels like "Passengers" and Dying Inside.

****He took the technique from John Dos Passos's USA Trilogy. For those who think that science fiction is about prediction, he predicted that Earth would have a population of 7 billion by 2010 -- only a year off from the actual date.

Unfortunately, Brunner, while a gifted writer, was also a raving socialist, and couldn't keep his politics separate from his fiction. It made for a bitter brew in his novels.

Robert Heinlein was a gifted writer, but unfortunately, he was a raving right-winger, and couldn't keep his politics separate from his fiction. It made for a bitter militeristic brew in his novels.

Brunner was not so much a socialist, but an avid anti-nuclear weapons activist, which in the light of rational assessment of our probable survival as species, is right up there with recognizing the dangers of global warming. Both have their disbelievers and skeptics, for what ever reason, but that does not make the facts go away or the dangers subside. It is telling that Reagan and Gorbachev eventually realized the danger of mutually assured destruction, and took the high road out of the most dangerous impasse. Atomic weapons in the hands of terrorists continues to be one of the most dangerous possibilities of our time.

As opposed to a "raving" facist?

I'd been a fan since 1960 and the rather Lovecraftian Atlantic Abomination, half of an Ace Double with a great cover by Ed Emshwiller. I still have it, as I do the Ballantine pb 1st edition of the very interesting Squares of the City. That was the first Brunner I'd lend to friends to get them to start reading him. I prize my Doubleday (not SFBC) 1st of Stand on Zanzibar, one of the greatest novels (SF or otherwise) of all time. Also, the Ballantine pb 1st of Double Double, the Ace Specials (I bought the entire series) edition of The Jagged Orbit with that wonderful cover by the Dillons, the Harper & Row (not SFBC) 1st of The Sheep Look Up (one of the most prescient novels ever), and the Harper & Row (not SFBC) 1st of Shockwave Rider. I did keep up with everything else he released (The Traveler in Black stories, which I have both as an Ace Special and in an expanded edition in the Bluejay Illustrated series, are wonderful). But that's his key work. I don't discuss my politics when talking about art. I can admire even writers who I strongly disagree with and so should everyone who loves literature.

Bill Reynolds – I'm curious as to why you would separate politics from art. Most art is political in some fashion or another, in one area or another. Brunner's work was sociological deep, perceptive and very much on the mark.The Squares of the City, Stand on Zanzibar, The Crucible of Time, The Long Result, The Sheep Look Up … and so many more of his vast legacy are stunning in their perception so many decades later. His work cannot be separate from a political perception. I don’t understand why your perception should be one of dual personality. One of the great errors of the “Western World” is Cartesian Dualism which affects everything from sports to politics to interpersonal relationships. Not criticizing … just not clear on the why of it.

Valid point. I didn't explain myself well. It's possible for me to appreciate the art of someone whose political viewpoint I'm totally at odds with. I.e., I don't have a litmus test. Back at the end of the 1960s, a pair of ads appeared in SF magazines on opposite sides of the Vietnam War issue. One was "signed" by authors opposed and the other by authors in support. I was vehemently opposed, to an extent that can't be overstated. And yet some of the authors who signed the supporting ad were favorites then and remain favorites now. R.A. Lafferty is a prime example. I refuse to let that disagreement get in the way of my enjoyment of his brilliant work (ref. the review of Past Master on this site). In the case of someone like Brunner, whose viewpoint I generally agree with, that agreement enhances my appreciation, but it isn't at the heart of it. One thing I read for is prose style, and one thing that I remember most about my initial reading of Zanzibar is how much I liked the style. Prose style is the primary reason why I enjoy Lafferty so much, even though I disagree with him about virtually everything.

If you are a fan, The Great Steamboat Race is worth a read. Not that high a rating on Goodreads, but I suspect that's partly because it was not what his audience expected.