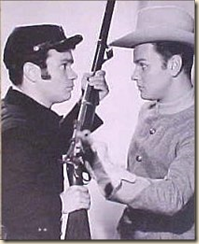 While the TV western was a staple of the 1950s and 1960s, the time period immediately preceding the west* -- the Civil War -- got little attention.  But, when the 100th anniversary of the war rolled around in 1961, NBC** decided the time was ripe for a TV series set in that time period.  So they picked up a show based on a series of stories in The Saturday Evening Post and The Americans was born.

The concept was a good one:  the Canfield brothers, Ben (Darryl Hickman) and Jeff (Richard Davalos) live in Harper's Ferry, Virginia when the war starts.  Older brother Ben runs off to join the Union forces, while Jeff thinks loyalty to Virginia is more important and joins the Confederates. The show alternated between the two, one showing Ben's adventures with the North, the next showing what was going on with Jeff and the South. Occasionally, they both appeared (as in the episode "The War Between the States," a lighter show*** where characters from individual states argue with each other for reasons not related to the war).

The show concentrated on their individual lives in the army, with battles occurring from time to time.  One of them seems to be the Battle of Ball's Bluff -- well known to Civil War buffs, but not one of the major battles of the war.

The show did suffer from the timidity of TV executives of the day. They wanted the character of Jeff so viewers in the South would watch (though the obvious conflict with the brother vs. brother theme made for good drama). And, of course, the issue of slavery was kept in the background. I don't believe the Canfields owned slaves, which would have made things a bit difficult to defend.

Darryl Hickman has been a very successful child actor who made the transition to an adult actor.  If the name is vaguely familiar, it's likely because you're probably thinking of his brother, Dwayne, who became a major early TV star on The Many Loves of Dobie Gillis.  Dichard Davalos had had minor parts in TV and a few movies.

The show wasn't a big hit.  It was criticized for being too violent, and quite possibly southern viewers looked elsewhere. And, of course, the racial issues of the war were not discussed for fear of alienating viewers.

The show only ran from January until May and then canceled. Davalos and Hickman continued with TV work, though they were never stars, and Hickman was even more overshadowed by his brother.

But as a kid whose interest in history was ignited by visiting Gettysburg, the show was required viewing -- and pretty good overall.

**In researching, I was surprised to discover I could even watch NBC at this point; the nearest NBC station was UHF and I hadn't realized we got a UHF tuner so early. It also precluded being able to talk with friends about the show, because they couldn't get it (my father sold TVs, so got the tuner).

***Many dramatic shows in the 60s had comic episodes (think "The Trouble With Tribbles" on Star Trek) in among the more serious ones. Now comedy is used to lighten the drama, and an entire lighthearted show is rare on a drama series.

Posted by Chuck Rothman at 9:50 PM

We get part of the series in Ireland in 1961. I think we had 3 episodes only and the national broadcaster RTE must have dropped it. I remember that for weeks after the last episode shown, I checked the TV on the relevant night and time, hoping to see it again. It was definitely one of those "great but forgotten" series that deserved better. Of course you could say that about lots of PEOPLE as well. And childhood passes!

I was only ten when The Americans aired in 1961, but I have always remembered it as one of my favorite shows of that time. Both my brother (3 years older) and I watched every episode on the black & white TV in our room. The Civil War was big among boys that year because of the anniversary, so instead of cowboys & indians we played Civil War -- entirely without reference to what the war was actually about, but with the far more necessary union and confederate (blue and gray) caps. So when this series came on the air, it was a very big deal to us! Thanks for refreshing my memories.

Only one episode is on youtube. However a great story, acting, and conclusion. Maybe 1961 television but much better than current tv shows. BTW, as a kid, I viewed every episode. Another great series on the same year was The Great Adventure - a series of American history. Three episodes are on Youtube.

I remember watching this show on TV in Australia in the 1960's but it disappeared after a short time. I believed it might have been released inAustralia as "The Blue and the Gray".......can anyone confirm that?


Mad Mike - I can confirm the series was called the "Blue & the Grey" out here in Oz in the 1960's. I watched them all and loved the show - sad when it disappeared!

Richard Davalos is probably most famous as the "square" , righteous, brother of James Dean in East Of Eden.