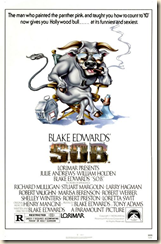 Sometimes a movie become famous for things that are only a sideline of the film.  Shark Attack III: Meglodon, for instance, would have been completely forgotten (and rightly so) if it wasn't for one particular line.*  S.O.B. is generally known -- if at all -- for one little bit of risque trivia. Yet it deserves more: it is one of the bitterest satires about moviemaking ever made.

Blake Edwards doesn't often come to mind as one the world's greatest directors, but he had a long and very successful career.  He's underrated in part because he did mostly comedies, which are often underrated. Edwards started out in TV in the 50s and became a success with Peter Gunn** and moved to movies with such hits at Breakfast at Tiffany's, Days of Wine and Roses, The Pink Panther***, and The Great Race.

Then he hit a slump.  A few so-so films ending up with the fiasco Darling Lili, an attempt to showcase his new bride, Julie Andrews. Edwards and Andrews wanted to show her in a role where she wasn't playing a goody-goody character, but the film went way over budget and flopped badly.

Edwards went into a slump, with several smaller budget flops until he reteamed with Peter Sellers**** for three new and successful Pink Panther sequels, and then became atop the movie heap with the smash hit 10.

And that's when he wrote and directed S.O.B.  The movie is about director Felix Farmer (Richard Mulligan), who after nearly going insane due to the bad reviews and box office for his film Night Wind, decides to reshoot it and add a nude scene for his goody-goody actress wife Sally Miles (Julie Andrews).

Edwards's bitterness over Darling Lili spills over into every scene.  There isn't an admirable character on screen.  Everyone -- including Farmer and Miles -- is conniving, grasping, completely filled with self-interest -- and wickedly funny.

Andrews obviously has fun with the parallel to her screen persona. Sally is sweetness and light on screen, but something of an egotistical prima donna off. Andrews, of course, has never really complained about her Mary Poppins/Maria roles, but has definitely wished that people would see her as something else.

And, of course, her nude scene is what is most noted about the film. Edwards was smart:  its shot as unerotically as possible.  Sally just tears off her top and stands there.  I think that's partially a comment on how people make too big a deal about such things.

The best performance, however, comes from Robert Preston as Dr. Feingarten, a quack who's always ready for the right drugs for any movie star's needs.  Preston's career had its ups and downs.  He was a movie success, but never a star until his definitive Harold Hill in The Music Man both on stage and on the screen. But he never capitalized on it.  Dr. Feingarten is just a great role, they type of character that makes you want to see more and who you find yourself looking forward to his every line.

The film wasn't perfect.  The last half hour adds a new subplot that is slow and not particularly funny. Because of this and some mixed reviews, the film did only fair at the box office.

But by the time the results were in, Edwards was already shooting his next film: Victor/Victoria.  The success of that kept S.O.B. from hurting Edwards's career.  It also made people forget about, it though. It is one of moviedom's greatest and bitterest satires.

*Known to those who managed to suffer through it as "THE LINE."

**Where he began his long collaboration with Henry Mancini, who wrote music for many of Edwards's movies.

***Most people may know that the name "Pink Panther" does not refer to Inspector Clouseau, but rather to the jewels that is the movie's McGuffin. But people tend to forget that in the original film, Clouseau was just a supporting character and there are many scenes without him.

****Who was in something of a career slump himself.

Posted by Chuck Rothman at 3:44 PM

"Shark Attack III: Megalodon, for instance, would have been completely forgotten (and rightly so) if it wasn't for one particular line.*"

We do also fondly remember the bit where the guy on the jetski zoomed into the shark's mouth. We laughed so hard I think we woke up the whole block.