Fink Along With MAD (music)

MAD Magazine was a revolution when it came along.  The story is well known -- William M. Gaines, publisher of horror comics, decided to produce a comic that was, well, comic.  His first two editors, Harvey  Kurtzman (whose importance to the magazine was overstated) and Al Feldstein (whose importance is often overlooked), created a juggernaut of low brow bust-a-gut humor.

It was wildly successful.  And MAD succeeded just about everywhere.* Reprints of the magazine were made into books. There was a successful off-Broadway show (The MAD Show).**  They made their mark on the legal system with a Supreme Court ruling that allowed people to write comedy lyrics to popular songs. 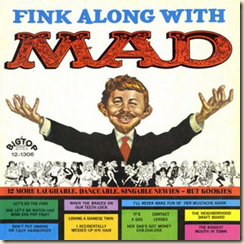 And, of course, they did music.  Fink Along With MAD is one result***.

The first single from it was massively popular, even if it never made the charts.  MAD would repackage their best articles into "Annuals." And, in order to get people to buy materials that they probably had already read, they would throw in special features.  For The Worst of MAD #9, they included a flexi-disk**** of "It's a Gas," billed as "Alfred E. Neuman vocalizes!"

The song was a  peppy tune.  After each musical phrase, the band would stop and you'd hear a burp.*****  For Mad's audience, that was hilarious.******

So Mad also released an album:  Fink Along With Mad.

The title is a reference to the Sing Along with Mitch albums of the period and was filled with classic Mad humor. Mad had a very odd way of looking at teenagers that probably wasn't ever true, but which they constantly used for jokes.

There are twelve songs on the record:

The concerns are dated, though in a charming way, since the record assumes that all that dating teens did was a little bit of necking and going further than heavy kissing was unthinkable.

The album didn't seem to be particularly successful.  Probably any real teen would have found the jokes more about dating ten years earlier.  But the tunes were catchy fifties rock 'n roll and doo-wop, and the lyrics are pretty funny if you're willing to accept the basis for the humor.

This was the last stand alone album MAD did (there were soundtracks for The MAD Show and MAD Presents Up the Academy******).  I have no idea what happened to the vocalists on the disk (other than Neumann); they were probably hired for the occasion and have long since left the music industry.

Of course, MAD started declining a bit in the 70s, when it was eclipsed by The National Lampoon. It's still going strong, but seems a bit formulaic, and I find it sad that I usually enjoy Cracked (MAD's second-rate competitor for many years*******) online more than anything I've read in MAD in years.

Society has changed, of course, but Fink Along with MAD is still a very funny album.

*A good thing for Gaines, whose horror titles were killed by the anti-comic hysteria of the mid-50s.

***There were a couple of earlier records:  Musically MAD and MAD "Twists" Rock 'n Roll.

***A record on thin plastic. This was a common giveaway of the time -- I've seen them on the back of cereal boxes, for instance.  Usually, they were square instead of round, since that was easier to make.

****If the record were done today, it would include farts instead. What this says about changes in humor over the past 40 years I don't want to know.

*****Our gym teacher once played it as we did calisthenics.  One more my more memorable school workouts.

******An attempt to put the Mad brand on an Animal House type movie. It flopped and MAD savaged it and later paid to have their name removed from it, though that's been restored and has developed some cult interest.  Though it seems every movie has developed a cult.

*******Remember Sylvester P. Smythe?  (I promise, no more footnotes after this.