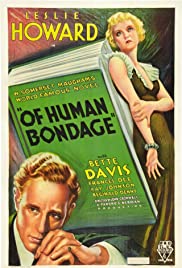 Bette Davis was one of the great actresses under the studio system. And part of that was that she knew quality and worked to get roles where she could show her talents. She worked very hard to get a role in Of Human Bondage and the result was worth it.

Philip Carey (Leslie Howard) was a sensitive artist who, when he showed no talent decided to become a doctor. His studies were interrupted when one night he went to a bar and fell deeply for the lower class waitress Mildred (Bette Davis), who has only contempt for him. Slowly he wins her over a bit, taking her to dinner and the theater and becomes more and more enamored of her. But she doesn’t care and the moment she has a chance to marry Emil Miller (Alan Hale*). Philip is devastated and goes back to his studies, only to find Mildred showing up on his doorstep, pregnant and abandoned by Miller. Philip does everything to help her, even ditching his current girlfriend Norah, a romance writer. When the baby is born, Mildred gives her up to nurses and doesn’t want to see him, and hooks up with Philip’s best friend, Harry (Reginald Denny). But Philip just can’t quit Mildred.

Davis’s role was a revelation. Mildred is selfish, manipulative, and only in it for herself.  It was very unusual to see a character like her on the screen.  It certainly deserved Oscar consideration, but – in an early case of outrage over being snubbed – She was not nominated for an Oscar.  People were so angry that the Academy allowed her as a write-in, but she didn’t win.**

Howard does a good job with the role of Peter. The script has him as a weakling whose so infatuated with Mildred that he ignores everyone else, and all the obvious evidence that she is only using him. Still, Howard managed to make him as sympathetic as possible as a man unable to control his passion.

The movie was a big step in Davis’s career. Instead of being just another Warner Brothers starlet, it showed that she was more and could handle dramatic roles with aplomb. Her work – and gamble – paid off handsomely.

** One thing marring it is her accent. She supposedly hired a cockney housekeeper to listen to the accent, but the veers from cockney, to upper class British, to hints of Brooklyn.

Posted by Chuck Rothman at 3:37 PM