The Turtles Present the Battle of the Bands (music) 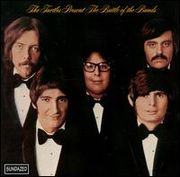 I’m a big fan of concept albums. There’s something very exciting about seeing a group trying to write an entire album of songs with a thematic link. But most concept albums are serious (if not bombastic). One of the few that manages to be funny is The Turtles Present the Battle of the Bands.

The Turtles were a California-based group that started out performing surf rock. They signed a contract with the small label White Whale records and began to record. Sensing that surf rock was losing popularity, their first album leaned toward protest rock, with three Bob Dylan songs, plus “Eve of Destruction.” Most of the album was made up of covers.

Then the Lovin’ Spoonful came along.  The group was intrigued and wanted to get away from the protests and into lighter, feel-good fare. And, on their third album they hit the jackpot: “Happy Together” was a number one hit.* They then had a number 3 hit with “She’s Rather Be With Me.”

They had hit the big time, but, of course, there were storm clouds. White Whale had no other successful acts. So the pressured the group to put out another hit.

Meanwhile, Howard Kaylan, the group’s front man, was becoming more ambitious. He wanted to write more of the songs** and to get the rest of the band involved in the songwriting. The result was The Turtles Present the Battle of the Bands.

The concept was a clever one. The album was ostensibly about various different groups all performing in a battle of the bands.*** So you had the fake groups The Atomic Enchilada, Quad City Ramblers, The Fabulous Dawgs, The Cross Fires.**** The inner gatefold showed these groups – all the Turtles – in different costumes. They ran a gamut of musical styles, from surf music, to R&B, to Bluegrass, to psychedelic rock.


In response to White Whale’s pressure to produce a hit, the group wrote a song with the dumbest lyrics they could, a satirical looks at the pop love songs of the day. Of course, as luck would have it, the song, “Elenore,”  was a major hit, making everyone happy.

The record also included “You Showed Me,” a song by the early Byrds that had not been previously recorded. It also made the charts.

One of the slyest jokes was the song “I’m King Kamanawanlea (We’re the Royal Macadamia Nuts),” the title of which came from a risque schoolyard joke of the era.

Despite the two hits, the album only did middling sales. Perhaps the mix of styles was an issue: people who didn’t get the joke were not interested in songs that weren’t in the genre they preferred.

The group did one more album, Turtle Soup, produced by Ray Davies, but that got good press but failed to crack the charts. At that point, the group broke up, though White Whale put out an album of B-sides and whatever could be found in the studio.

Volman and Kaylan (along with drummer Jim Pons*****) joined the Mothers of Invention.****** White Whale, refused to let them use the Turtles name, or even their own, so they were billed as “The Phlorescent Leech and Eddie.” They were featured and given a large part in Zappa’s 200 Motels. As “Flo and Eddie,” they did several moderately successful humorous albums. Eventually, they got the rights to their own names back, but by then Flo and Eddie was too well-established to change.
___________________________________________________________
*Knocking the Beatles out of the #1 spot.
**Their two hits were written by outside songwriters, as were most of their songs on the albums.  Of note was that they recorded at least one song written by Warren Zevon.
***This was a common concept in the 60s, where several local groups would perform one evening, with a prize given to those who the audience liked best (judged by applause at the end). It’s a common plot element of any TV show or movie featuring a rock band, from Josie and the Pussycats to School of Rock.
****An early name of the group.
*****Who later quit music to work for PR with the New York Jets, and designed the logo the team used in the 1980s.
*****One nice irony: on the Mothers’ first album, the liner notes disdainfully quoted a record executive who wanted to make the Mothers as big as the Turtles.
Posted by Chuck Rothman at 4:36 PM